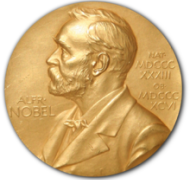 Between 1901 and 2022, the Nobel Prizes and the Sveriges Riksbank Prize in Economic Sciences in Memory of Alfred Nobel were awarded 615 times to 989 people and organisations. With some receiving the Nobel Prize more than once, this makes a total of 954 individuals and 27 organisations.

The Nobel Prize in Chemistry 2022 was awarded jointly to Carolyn R. Bertozzi (USA), Morten Meldal (Denmark) and K. Barry Sharpless (USA) “for the development of click chemistry and bioorthogonal chemistry”

The Nobel Prize in Literature 2022 was awarded to Annie Ernaux (France) “for the courage and clinical acuity with which she uncovers the roots, estrangements and collective restraints of personal memory”

The Nobel Foundation is a private institution established in 1900 based on the will of Alfred Nobel. The main task is to manage the assets made available through the will, and the intellectual property related to the Nobel Prize that has developed over the years.

On 27 November 1895, Alfred Nobel signed his last will and testament, giving the largest share of his fortune to a series of prizes in Physics, Chemistry, Physiology or Medicine, Literature and Peace – the Nobel Prizes. In 1968, Sveriges Riksbank (Sweden’s central bank) established The Sveriges Riksbank Prize in Economic Sciences in Memory of Alfred Nobel.